David and Sally gave us tickets to see the Harlem Globetrotters in San Jose. They won, of course, 143 to 82.

Posted by Unknown at 8:42 PM No comments:

This recipe for gluten-free bread comes from Thane and Johanna.

We cook it on the longest setting our machine has (about 3 hours 10 minutes). The stuff has some trouble browning.
Posted by Unknown at 11:29 AM 2 comments:

Clara's class performed in the end-of-year Carnaval performance at Fiesta Gardens on June 20. The 4th graders did a flamenco dance.

I think they looked great!
Here's a photo of Clara in her costume. 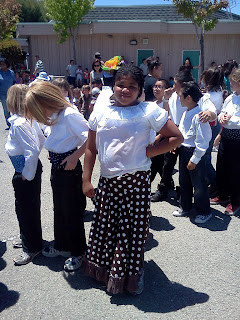 And here's Curtis with a tattoo he got. 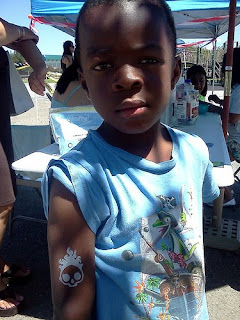 You can click on both photos to see a larger version, and other photos from the performance, on my Flickr account.
Posted by Unknown at 9:17 AM No comments: 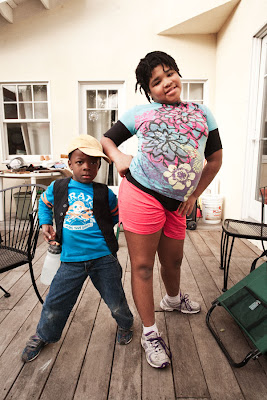 Originally uploaded by dtweney
Posted by Unknown at 8:23 PM No comments: 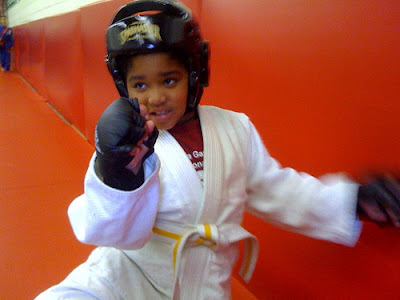 Clara has been taking weekly judo classes for about a year. At her school they also teach sport jiujitsu, and she just started learning that, too. Today she went to her first tournament, which was at her school, Cahill's. It was a pretty informal tournament, for beginners, with just students from Cahill's and a hapkido school in San Francisco.
Clara had a great time. I took her there at 9am, helped her sign in and get her gear on, and went with her while she weighed in. (88 pounds!) Then I left, because I was due over at a parenting class with Karen. I left Clara with Karen's cellphone in the duffel bag, and she called me a couple times during the course of the morning to tell me what a great time she was having.
She competing in two bouts and won a total of 13 points, for doing flips and pins on her opponent. Maybe some strikes, too -- I don't know all the details. When I came back at about noon she was sitting happily on the side of the mat, watching the other competitors and looking really pleased.
She came in second place!
After that we went for hamburgers at In 'n' Out and she went home and made peanut butter chocolate chip cookies in her easy-bake oven. I have rarely seen her so happy. It was a great day!
Posted by Unknown at 8:22 PM 1 comment: 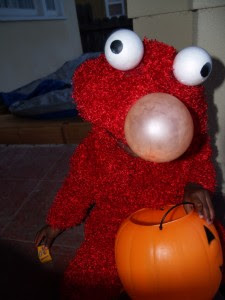 Karen stayed up until 1 am on Thursday night and impaled her finger with the sewing machine on Friday morning to make these costumes: Clara was a princess (Princess Peach from Super Mario Bros., to be specific) and Curtis was Elmo. The payoff: Curtis won first prize for "cutest costume" at the King Center on Halloween night. And Clara was adorable, of course!
A couple more Halloweeny pictures below from last weekend, when Clara had some friends over. They made "witch's brew" out of grape juice, apple juice, and a huge chunk of dry ice, then wrapped each other up in toilet paper to make themselves into mummies. Curtis got to be a mummy too. And the brew was surprisingly delicious.
Posted by Unknown at 8:21 PM No comments: